Things to do on New Year’s Eve in London

Make New Year’s Eve an extra special one by spending it in the UK’s capital city. London lines up so many parties and events to help you ring in the New Year, from 1920s soirees to sky-high Michelin-starred meals. And, of course, there’s the spectacular fireworks display too.

Every year, central London is lit up with a spectacular pyrotechnic show on the Victoria Embankment. The fireworks are set off in sync to a musical soundtrack and the chimes of Big Ben accompany the countdown to midnight. Since 2014, the event has been ticketed, so if you want front-row seats for the show, you’ll need to purchase your tickets in advance.

But, the good news is, you don’t have to be right up close to enjoy the show. There are plenty of spots where you can get a good view and join in the celebrations too. The Millennium Bridge, Tower Bridge and Vauxhall Bridge are all great places to watch the fireworks for free. Or, if you’re in North London, head up to Primrose Hill or Parliament Hill on Hampstead Heath to get a great view of the dazzling display. 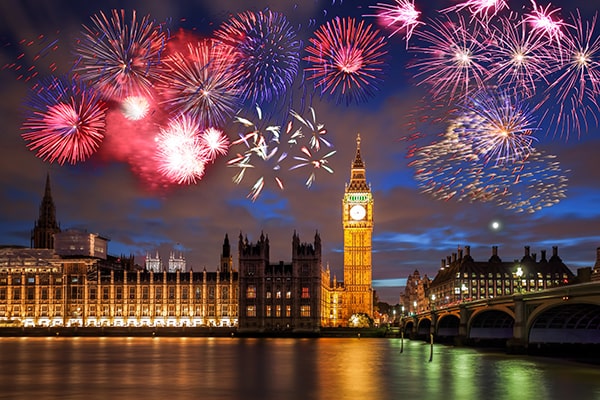 Fancy seeing the New Year’s Eve fireworks from the water? A river cruise gives you the chance to drink, dine, dance and enjoy the pyrotechnic show all at the same time. Plus, you’ll get a gorgeous after-dark view of London’s best landmarks illuminated against the night sky. There are a few for you to choose from, including speedboat rides, fancy galas on the river and dinner cruises.

Combine your sightseeing and partying by ringing in the New Year at one of London’s famous landmarks. Every year the Sky Garden puts on a themed New Year’s Eve party where you can dance the night away and get a great view of the fireworks over the Thames. There’s also a New Year’s Eve party at London’s tallest building, The Shard, and the capital’s famous museums put on special themed soirees too. In 2017, the Natural History museum held an ‘under the sea’ party with ocean-themed cocktails, marine-inspired costumes and after-dark tours around the exhibits. 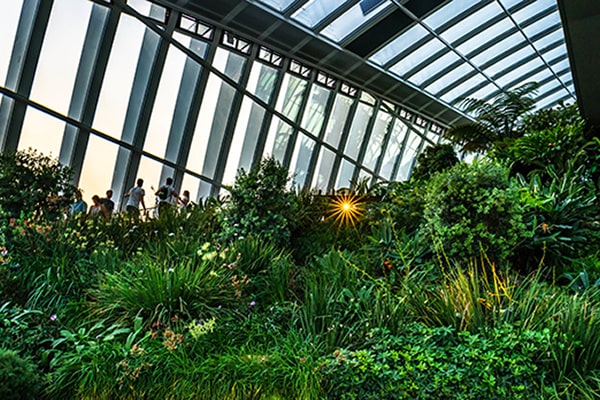 Dine at the city's best restaurants

There’s no better time to experience London’s gastronomic scene than on New Year’s Eve. All of the city’s top restaurants offer special New Year’s Eve menus accompanied by Champagne toasts, live entertainment and dancing. If you pick the right spot, you might even see the fireworks too. Galvin at Windows in the Hilton Hotel, The Babylon at Kensington Roof Gardens, and Aqua Shard are all great spots to enjoy gourmet fare and see the fireworks at the same time.

Welcome in the New Year by partying the night away at one of London’s clubs and bars. The city offers an eclectic mix of traditional pubs, quirky themed bars and massive clubs. And on New Year’s Eve you’ll find every kind of party – a 1920s soiree at the Candlelight Club, a black tie ball at The Piano Works, and a Blitz party at Bourne and Hollingsworth. Most pubs and bars are ticketed and require booking in advance, so make sure you plan well ahead to avoid missing out. 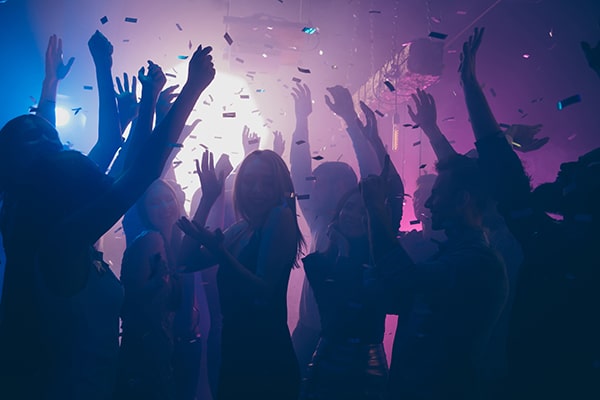 Ready to join in the New Year’s Eve countdown in London? Whether you love a themed party, a fancy meal or a spectacular show, there’s an activity for you. Check out our London bus routes for more inspiration on things to do in the city.