For a picture-perfect view of London, take a stroll across one of the city’s many beautiful bridges and enjoy spectacular views of its impressive skyline. From the iconic and historic Tower Bridge to the famously nicknamed Millennium Bridge, each has its own character, charm and story to tell. A great way to learn the history of London Town.

If a tour of London Bridges sounds like a great day out to you, we’ve shortlisted the ones we think should feature:

One of the most striking of the bridges along the River Thames, the design of the Millennium Bridge was actually the result of a competition in 1996. The first London bridge built along the Thames in over 100 years, its well-known nickname is the Wobbly Bridge due to the swaying nature of the engineering. While walking along the Millennium Bridge, be sure to spot the many works of art that decorate it, and the stunning view of St Paul’s Cathedral. 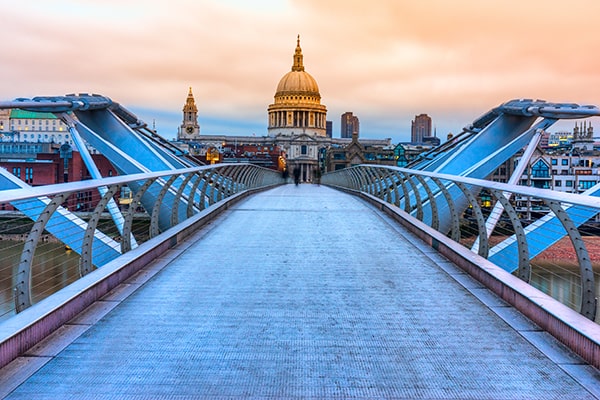 Find the nearest Big Bus Stop to the Millennium Bridge

One of London’s suspension bridges, Tower Bridge is an iconic symbol of this city. It opens to give way to boat traffic, a fabulous sight if you time your trip well. Originally built in 1886, it was painted blue, red and white for the silver jubilee of Queen Elizabeth II in 1977, today making it stand out from the rest. Why not visit the Tower Bridge Exhibition and stroll the glass walkway giving a very unique perspective from above? 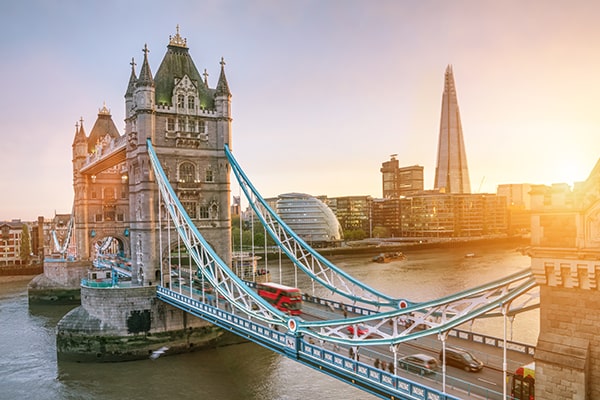 Journey over Blackfriars Bridge and look out for the stone carvings decorating it, by sculptor John Birnie Philip. There’s water birds on the piers, marine life and sea birds on the east side, and freshwater birds on the west, all reflecting the role that Blackfriars plays as the tidal turning point. Blackfriars Bridge became internationally notorious in 1982 when the body of Roberto Calvi, a former chairman of Italy’s largest private bank, was found hanging from one of its arches with five bricks and around $14,000 in his pockets. 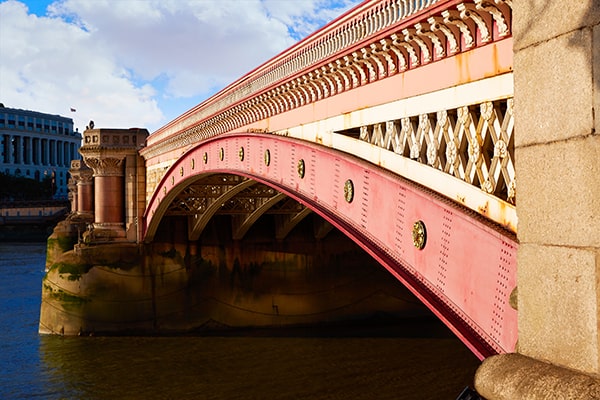 London Bridge has reincarnated into many forms over the years, since the original Roman crossing in 50 AD. An early version of London Bridge was so much more than a means to cross the River Thames. It had a chapel, lots of shops and houses, waterwheels and even a mill. Many devastating fires over the years, perhaps the theme of nursery rhyme ‘London Bridge is Falling Down’, saw it rebuilt several times. Due to its tragic past, the current London Bridge is rumoured to be haunted, with claims of a British police bobby patrolling the bridge sighted by visitors. Let us know what you find! 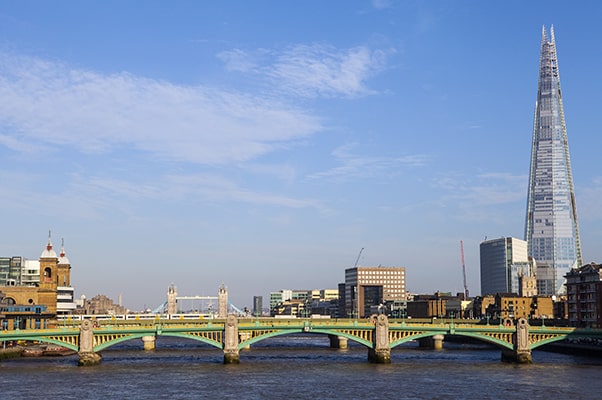 The decision to build Westminster Bridge was a controversial one back in the 1600s. If it went ahead, watermen would be at risk of losing their jobs, as fewer commuters would need ferrying across the river, and as a result there’d be fewer available seamen for the navy if England ever went to war. Nicknamed the Bridge of Fools due to the controversial way funds for the build were raised via the lottery, this name stuck as construction took more than 11 years to complete. Visit on a sunny day at around 1pm and see if you can work out the architectural joke – we’ll give you a clue…look down at the reverse shadows. 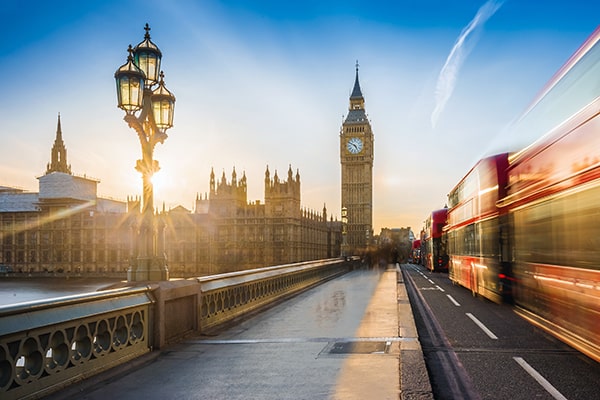 Did you know that Waterloo Bridge is nicknamed the ‘Ladies Bridge’ because it was mostly built by women? As men went off to battle in World War II, the women of England entered the workforce in the metal, chemical and infrastructure industries, to name a few. Women worked on railways, canals and on buses. Women built Waterloo Bridge. But you probably didn’t know this as they never did get the recognition. Cross Waterloo Bridge and celebrate these ladies. 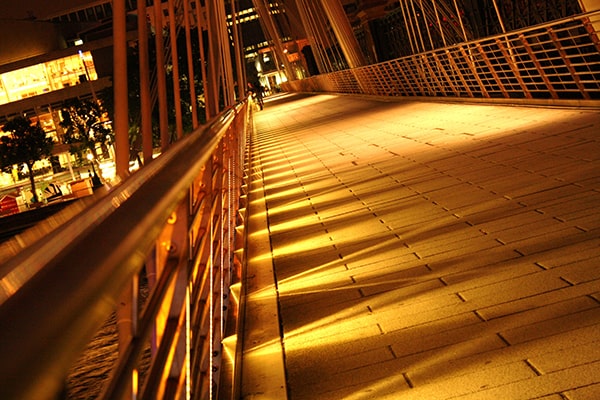 Lambeth Bridge has become somewhat of a celebrity London bridge. It has featured in many high-profile Hollywood films, like Harry Potter and Bond. Here’s a fun fact for you; The Lambeth Bridge colour scheme is red, purposely matching the benches in the House of Lords, which is on the side of Westminster Palace closest. Meanwhile, Westminster Bridge is mostly green, the same colour as the leather on the seats in the House of Commons, which is on the side of the Palace nearest to it. 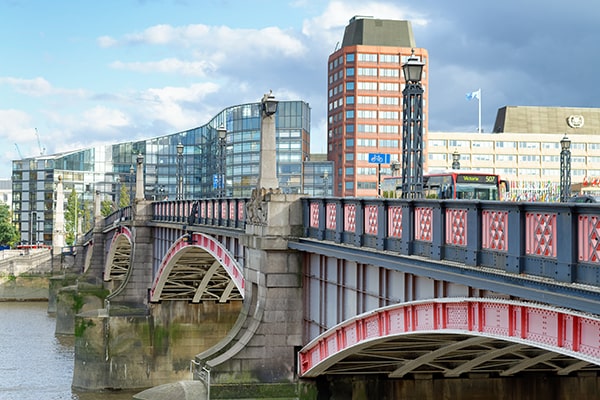 Linking Vauxhall and Pimlico, Vauxhall Bridge is an arch London bridge that crosses the River Thames. An important transport link today, it features huge 8 bronze statues designed by Alfred Drury and Frederick Pomeroy. Attached to the bridge’s piers, they’re twice life-sized and not easy to see as you actually cross the bridge. Try to spot the figurine of a lady holding St Paul’s Cathedral. Just don’t dangle off the side! 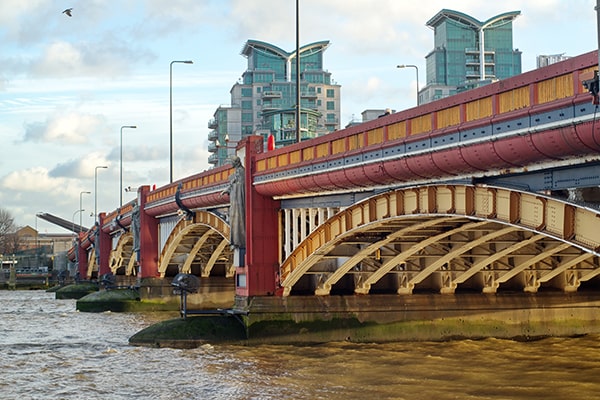 If you manage to see all of the above London bridges, you’ll have ticked off some of the most well-known and significant bridges in this city. Covering old and new, all with a fascinating tale to tell, taking this tour is a great way to learn more about their history. And of course, if you hop aboard a Big Bus tour, you’ll get to see them from a different perspective – just hop off when you want to explore more.