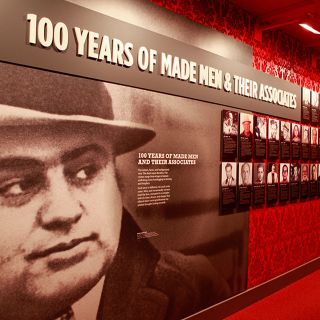 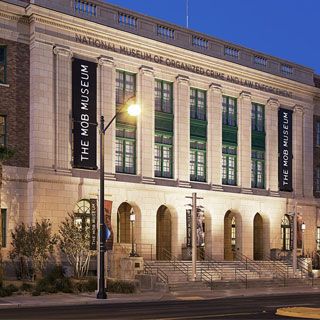 Opening in 2012, the Mob Museum is ironically situated inside an old court-house. The museum is home to a series of world-class, immersive exhibits on American organized crime. Learn about famous Dons, Made Men, Capos and Goomahs, and discover how American history has been shaped by the the events and characters of the continuing battle between the Mob and the law. The Mob Museum was awarded accreditation from the American Alliance of Museums on March 1, 2017. This is the highest national recognition afforded, meaning that the Mob Museum joins a select group of insitutions that meet national standars and best practices for US museums.

Learn about America's crime underworld and the characters that built it - and fought it. From Al Capone and Giuseppe "Joe the Boss" Masseria, to Eliot Ness & J. Edgar Hoover, the Mob Museum uncovers the key players and their activities, on both sides of the law.

From prohibition to involvement in the US economy, to plots to assassinate Fidel Castro, the Mob has had a presence in some of the biggest events of the last 150 years. Learn about how the Mafia found its footing in the US and became such a dominant force.

Thanks to popular culture, we're familiar with many Mafia rituals, customs and symbolism. Deepen your knowledge at the Mob Museum - disover what 'Omertà' means, and learn about the significance assigned to things like ethnicity, family secrets, tribute, initiations and facial hair.

From its location within a former court-house to its collection of remarkable artefacts, the Mob Museum showcases a truly authentic picture of American organized crime. Visitors will see the blood-stained wall where the Saint Valentine's Day Massacre took place, along with historically iconic items like a tommy gun and electric chair. There are also many interactive and hands-on exhibits that highlight infamous Mafia involvement with gambling, drugs, prostitution and bootlegging.

Enhance your sightseeing experience with a ticket that includes our Las Vegas bus tour + attraction entry. Choose from top Las Vegas attractions that grant you the freedom and convenience to explore Las Vegas.