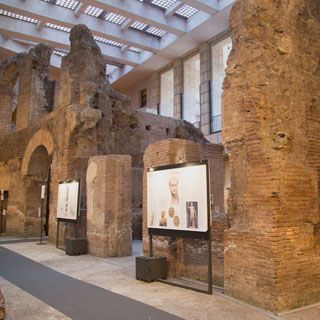 About the Stadium of Domitian

Discover the ruins of the Stadium of Domitian, a UNESCO world heritage site located nearly 5 meters beneath the footprint of Rome's Piazza Navona. Constructed nearly 2,000 years ago, the Stadium of Domitian was commissioned by Emperor Titus Flavius Domitianus as a gift to the people of Rome, and was used primarily for running races. Today, you can explore the remnants of the Stadium via an intimate exhibition that includes 3D videos, audioguides and interactive displays.

The ruins of the Stadium of Domitian (also known as Stadio di Domiziano or Circus Agonalis) are a UNESCO world heritage site located about 5 meters beneath the present-day Piazza Navona. The shape of the Piazza follows the footprint of the Stadium, which had a length of nearly 250 meters, and terraced seating rising to nearly 30 meters above ground level. The Stadium was commissioned by the Emperor Titus Flavius Domitianus around AD 80, and was principally used for running races and other athetic events, although there are records of gladiator shows taking place here following fire-damage to the Colosseum in AD 217. The Stadium is notable for its brick and concrete substructure - a robust, fire-retardant and relatively cheap material that would have appealed after fires destroyed much of the surrounding area in AD 70.

The Stadium of Domitian exhibition reveals the remnants of the stadium, located just 5 meters beneath the present-day Piazza Navona. Enter the exhibition from Via di Tor Sanguigna and descend into the excavations beneath the Piazza to explore the ruins and archeological treasures uncovered, including numerous sculpture fragments and a Pentelic marble torso, a copy of the 4th century BC Apollo Lykeios by Praxiteles. 3D videos, plaques, interactive displays and audioguides compliment the ruins, revealing the history of the stadium in further detail.