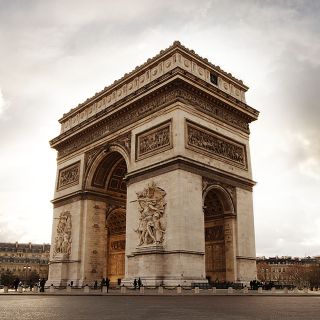 Completed in 1836, the Arc de Triomphe is one of the biggest triumphal arches in the world, and was commissioned by Napoleon to commemorate the achievements and sacrifices of the Grand Armée during the French Revolution and Napoleonic Wars. The Arc is covered in relief sculpture which depicts French youths in battle, and beneath its vault lies the Tomb of the Unknown Soldier from World War I. Visitors can marvel at the sheer size and detail of the Arc from ground level, and take the elevator or climb 284 steps to the roof terrace at the top. Take in 360° panoramic views of Paris, and marvel at the circulating muddle of traffic in the roundabout below. The easiest and safest way to get to the Arc is via the underground walkway on the Avenue de la Grande Armee, which will save you from contemplating a mad dash through the traffic.

History of the Arc de Triomphe

Napoleon wanted to raise a Triumphal Arch to commemorate his Grand Armée, who had fought in the French Revolution and Napoleonic Wars. Originated by the Romans, Triumphal Arches were distinctive classical monuments used to commemorate victorious generals, battles or significant public events, and the Arc de Triomphe was modelled on the famous Arch of Titus, unveiled in Rome in AD. 82. Construction on the Arc de Triomphe began in August 1806 at the peak of Napoleon's fortune, just after his victory at Austerlitz. However, the Arc wasn't actually completed until after the fall of Napoleon, during the Bourbon restoration. It was inaugurated in 1836 by King Louis-Philippe. Napoleon's remains passed under the Arc in December 1840 as they journeyed from Saint Helena to their final resting place at Les Invalides.

The terrace at the top of the Arc de Triomphe offers beautiful 360° panoramic views of Paris. Visitors will be able to see down the glamourous tree-lined Champs-Élysées, look into the lush Tuileries gardens, see the Eiffel Tower rising in the distance, and study the elegant cream-coloured classical architecture lining the surrounding boulevards. It's also fun to be distracted by the spectacle of revolving traffic in the roundabout below. This seemingly lawless roadway gives traffic entering the roundabout right-of-way, and apparently insurance companies will automatically accept a 50/50 share of the blame for accidents here, regardless of who's at fault.

The Arc de Triomphe stands at the western end of the Champs-Élysées at the center of the famous roundabout Place Charles de Gaulle, formerly known as de l'Étoile for the star-like radius of its twelve connecting avenues. It's also the central cohesive element of the Axe Historique (also known as the Voie Triomphale), the famous sequence of grand thoroughfares and monuments that traverse the area between the courtyard of the Louvre to the Grande Arche de la Défense. To this day, there are still restrictions on building heights in this area so that views of the Axe Historique can be preserved.

Ticket e-vouchers must be exchanged for entry tickets at the Big Bus Tours information center (11 Avenue de l'Opéra, 75001 Paris) prior to visiting the Arc de Triomphe. Once you arrive at the Arc, please redeem your entry ticket at the ground level before entering. Note that children aged 0-17 can visit for free. Visitors with limited mobility can access the arch but may need assistance getting through the underpass. Although there is one elevator, you must climb 46 stairs to access the highest viewpoint.

Since its construction, the Arc has become a rallying point for the powers that have controlled the city. Famous victory marches around or under the Arc have included the Germans in 1871, the French in 1919, the Germans in 1940, and the French and Allies in 1944 and 1945. After the interment of the Unknown Soldier, all military parades have avoided marching through the actual arch, out of respect for the tomb and its symbolism, with the parade route going around the arch instead of through it. Both Hitler in 1940 and de Gaulle in 1944 observed this custom. Today, the Arc is the starting point for the grand annual Bastille Day military parade on 14 July.