The architecture in Chicago is proof that you don’t always have to go indoors to have fun. Soaring Chicago architecture reflects the boom years of the city that’s been a business hub since it was first founded. Stroll down Michigan Avenue and gaze up at icon after icon. There are all sorts of other buildings around the city that are well worth a look too.

A true gem of the Chicago skyline, Willis formerly known as the Sears Tower, held the crown of the world’s tallest building for an unbeaten 25 years. But it’s not all about the height, the design has gained praise too. The Willis is actually nine structures joined together, giving extra strength in bad weather, essential in the Windy City. 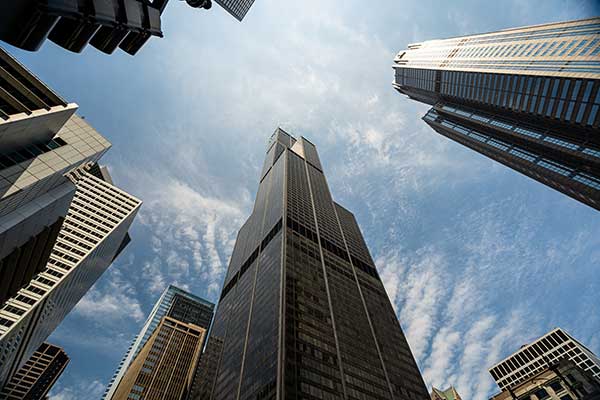 Your Chicago tour continues here. Gleaming white with black pinstripes for windows, the cosmopolitan Crain Communications Building manages to make its own unique mark amongst all the other buildings jostling for attention on Michigan Avenue. By the way, that sloping roof is purely for decoration — don’t buy the story that it’s to stop a shadow being cast on the beach!

It may hark back to the late 1960s, but Lake Point still shows off its up-to-the-minute style. The curved lines make it quite unlike any other of Chicago’s skyscrapers, and the organic shape means the views from every window are superb. No wonder so many A-listers have chosen to live here, including Halle Berry, Tom Cruise and Kurt Russell. We can’t guarantee you’ll spot a celebrity but it’s another reason to visit to this Chicago landmark. 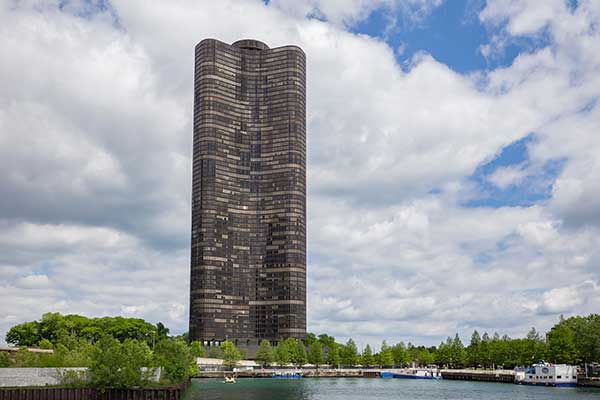 This may not be a skyscraper, but it’s still a pretty special Chicago attraction. The pavilion is designed to be an outdoor classroom where people can come and learn about nature in the urban environment. It’s also very popular with locals and doubles up as a wedding venue. 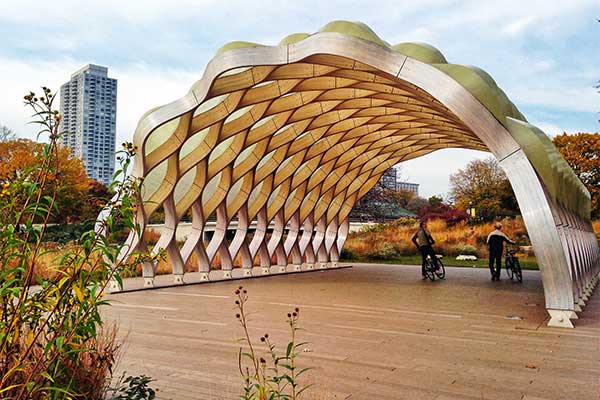 THE CARBIDE AND CARBON BUILDING

Welcome to 1920s Chicago. Having developed the world’s first dry cell battery, Carbide and Carbon wanted to make a fresh statement to attract new business. The building they came up with is still making a statement today, with its glittering façade of gold leaf, bronze and polished black granite. Take a look at the opulent lobby too, it’s one of the most luscious places to go in Chicago if you want a selfie. 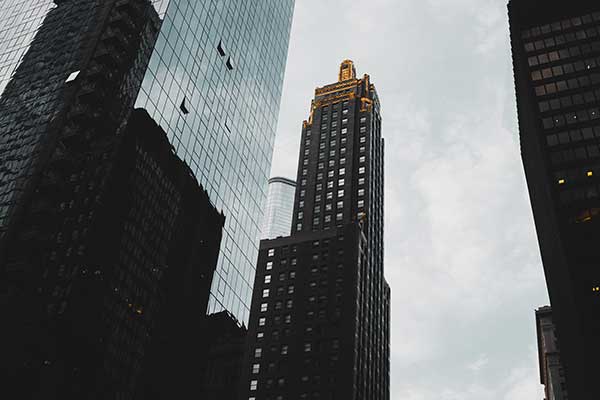 Back in the 1960s, town planners wanted to lure suburban dwellers back into the city. They asked architect Bertrand Goldberg to design a place where people would want to live, and Marina City was his vision. The two ‘corncob’ towers had everything people needed, including parking, offices and a theatre. And it stood the test of time, because the area is now one of the most popular residential districts in the city. Visit these Chicago apartments as part of your architecture tour. 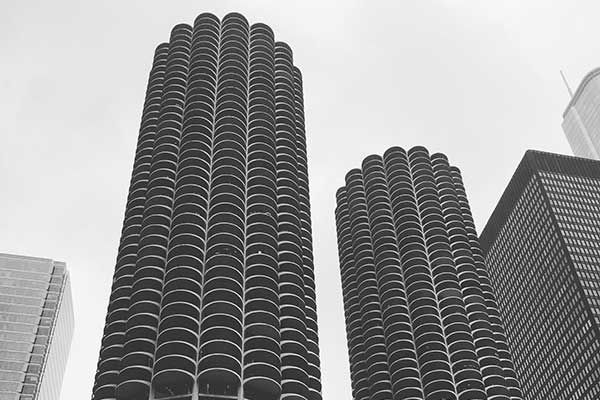 Designed by Frank Lloyd Wright, Robie House is often dubbed the best example of his celebrated ‘Prairie Style’. The horizontal lines mimic the Midwestern landscapes, and natural materials of brick and wood give the house a simplicity that’s utterly elegant. It’s one of the places in Chicago you simply must-visit, and luckily you can tour the house from Thursday to Monday. 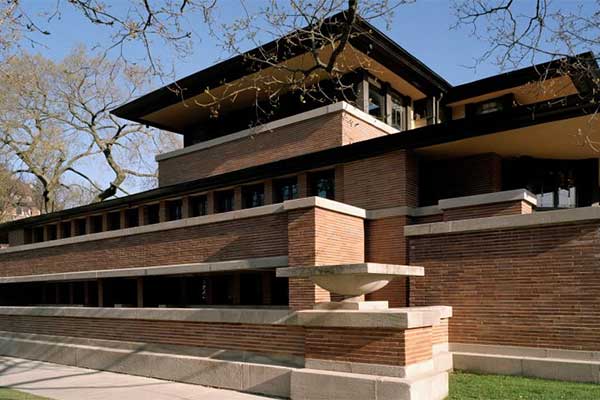 MUSEUM OF SCIENCE AND INDUSTRY

The World Fair of 1893 gave Chicago the chance to show the rest of the world what it was made of, and the Museum of Science and Industry is one of two buildings still standing since that iconic year. Perfectly symmetrical, the building is beautifully neo-classical, with ionic columns and limestone facades. 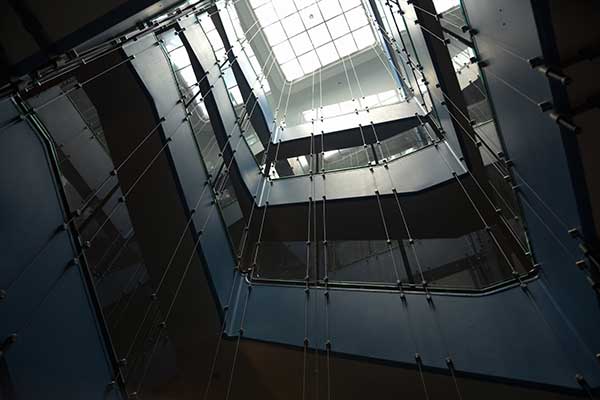 Had enough of Chicago buildings? A public park and civic center on the lakefront, Millennium Park plays host to a variety of stunning public art, including Anish Kapoor's famous reflective sculpture, Cloud Gate (fondly referred to as 'The Bean'). Construction on Millennium Park began on former railroad tracks in 1998 and, despite opening 4 years behind schedule to a budget blowout of $500 million, the park's 2004 debut attracted over 300,000 people, with celebrations lasting three days. 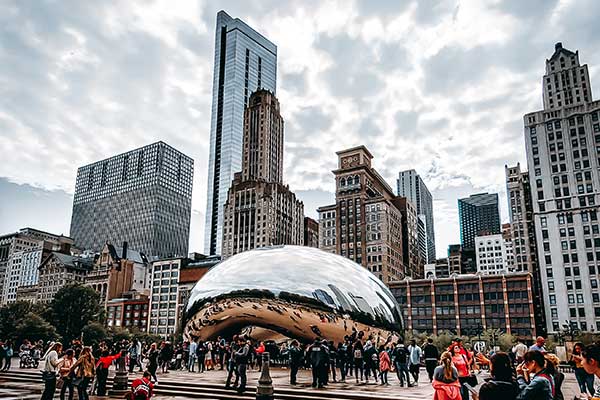 Designed by architect Frank Gehry, the Pritzker Pavilion takes pride of place in Millennium Park. It’s a band shell designed for live music performances, created from Gehry’s trademark stainless steel. To overcome the legal height restrictions in the park, the Pavilion is actually classified as a work of art rather than a building. 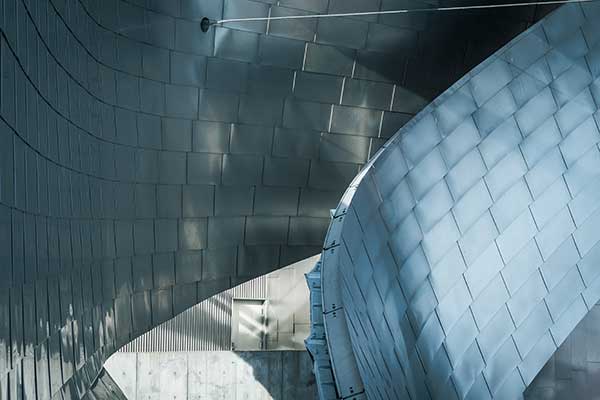 If you’re a budding architect, lover of unique buildings or simply looking for some cool architecture to pose in front of for Instagram, Chicago has it all. Pick one or two to add to your trip or visit them all aboard one of our Big Bus tours. And if all that walking makes you thirsty, head to one of the Best Bars in Chicago for a refreshing drink afterwards.