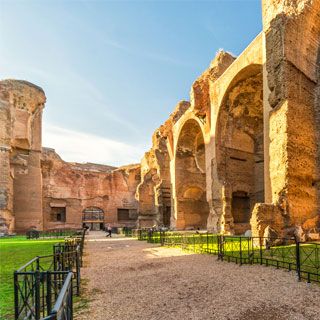 - entry to the Baths of Caracalla

About the Baths of Caracalla

Discover the Baths of Caracalla, an ancient Roman spa complex located a short distance from the Circus Maximus. The 1,800-year old remnants of this enormous public facility occupy a vast area, complete with gardens and outdoor concert venues. Located slightly off the beaten track, the Baths are highly-rated by visitors but remain a hidden gem, making them perfect for a peaceful afternoon of wandering and wondering. Visitors to the baths will be rewarded with fascinating insights into the lives and customs of Ancient Romans, and a real appreciation for the sheer scale and ambition of their architecture and society.

The History of the Baths

Also known as Terme di Caracalla or Thermae Antonianae, the Baths of Caracalla were completed in 217 during the reign of Emperor Caracalla. Most ancient Romans didn't have access to running water or sanitary facilities, so the Baths were heavily patronised by all strata of society. More than just a series of bathing pools, this vast complex also included facilities like gymnasia, gardens, shops and libraries, and became a key destination for socialising and networking. In the 5th century AD the Baths were even considered one of the seven wonders of Rome. The Baths remained in use until the 6th century, when the barbarians severed Rome's water supply.

Construction and operation of the complex demanded enormous effort. Work on the Baths began in around AD 211 and was completed in AD 217, meaning workers would have installed over 2,000 metric tonnes of material every day for six years, including at least 3 million bricks. Over 252 columns were built, and 16 of them were at least 12 meters tall. The Aqua Antoniniana aqueduct was built to serve the baths, filling 18 special cisterns with water. These in turn were connected by lead pipes with the baths proper. Furnances heating the seven hot pools of the Caldarium and the saunas (laconica) are estimated to have burned around 10 tonnes of wood per day. Fuel storage capacity had been estimated at more than 2,000 tonnes of wood.

Features of the Baths

The central series of pools consisted of a frigidarium (cold room) with four pools, a tepidarium (medium) with two pools, and a circular caldarium (hot room) with 7 pools and saunas (laconica). The northeastern end of the bath building contained a natatio, an Olympic-sized pool measuring 50m by 22m. The natatio was roofless, with bronze mirrors mounted overhead to direct sunlight into the pool area. The complex also featured a library - two rooms, one for Greek texts and one for Latin. There were two palaestras (gyms where wrestling and boxing were practiced), and the mithraeum at the baths, discovered in 1912, is considered the largest documented gathering space for the worshippers of the Persian god Mithra.

The baths are a short 10-minute walk away from our Big Bus Stop at the Circus Maximus. Although the site is open daily, hours vary seasonally, so please redeem your ticket and check hours with a Big Bus Tours staff member before your visit. There's a small bookshop at the entrance gate where you can hire an audio guide (available in a variety of languages) or VR goggles, which display CGI renderings of the baths in their magnificent former glory. Allow yourself a few hours to tour the site and explore the ruins, and don't skip the underground exhibition.